Whether you loved your childhood or despised it, the culture of the time period when you ‘grew up’ has more than likely defined you as the person you are today.  You may think you escaped the clutches of your past, but if you’re like me, your thinking is all wrong.

When asked, most people will say they remember the ’80’s as a decade of mediocre TV, huge hair, and shoulder pads as a fashion statement and, for the most part, I agree.  I do, however, maintain that MANIMAL and PARTNERS IN CRIME were really fun TV series and if you don’t believe me youtube them.  And it may be because I was a teenager when MTV debuted, but I still consider Duran Duran to be THE best band ever in the history of music and it has nothing to do with their beautifully-coiffed big hair and perfectly-fitting super-wide-shoulder-padded jackets.  Again, if you don’t believe me, youtube them and start with the Wild Boys video, you will thank me later.

Unfortunately, there is a flip side to all the over-produced music videos, buffalo plaid and/or neon colored outfits, and asymmetrical haircuts that made up my young adulthood.  There is also the forced realization that since the ’80’s was a time period of excess I was subconsciously taught that without financial success you were a failure.

Remember, this was a time of J.R. Ewing, Alexis Carrington, and the rest of the gang who populated The Lifestyles of the Rich and Famous.  My head was filled with champagne wishes and caviar dreams, but my heart was filled with the need to be artistic.  Plus, my brain was not filled with the knowledge of how to balance a checkbook or how to focus my substantial energies to make money to even have a checkbook.  I had ambition and drive, but little practical guidance from my elders – either family members or actual school guidance counselors – and so I drifted away from careers that would have netted me an ’80’s sized fortune and toward endeavors that satisfied my soul.

Please don’t get the wrong idea, I’m not blaming anyone for not steering me in the right money-making direction.  My parents were loving and supportive, but they didn’t understand how the world really worked.  And I don’t remember ever reaching out to a guidance counselor for guidance and even if I did, I was so headstrong and stubborn I probably wouldn’t have listened to anything I was told.  So I graduated college with a Journalism degree and magna cum laude bragging rights and very quickly went on my merry way to become an actor aka a waiter.  But like Gloria Gaynor, I survived.

I’ve published eight novels and am currently working on my ninth.  I have written over ten plays, all but one full-length play has been produced, several 10-minute plays have been published, and many have won awards.  I’ve also written many magazine articles, screenplays, and am the Artistic Director for a community theatre in my hometown in New Jersey.  I’ve performed in musicals in New York, the Far East, and many places in between.  And yet I still question if I’m successful because my bank account hasn’t ballooned as much as my talent, and dare I say, accolades.  Trust me, I know I’m not Stephen King or Tennessee Williams, my work isn’t known world-wide or considered to be national treasures, but success comes in all shapes and sizes.

Years ago, I had a book signing at a college in South Jersey and about eight people attended.  One of them was a 14-year-old girl who is now my number one fan. At her Sweet 16 birthday party, one of my books was the party favor!  She, her mother, and her entire family are now my friends and I’ve had the pleasure of watching this ‘kid’ grow into an intelligent, funny, self-assured young woman about to leave the nest to attend college.  I couldn’t be more proud.

Another young guy was so enamored with one of the recurring lines of dialogue in The Archangel Academy Series that he had the phrase tattooed onto his back!  I was dumbfounded when he told me, then humbled and even a little bit honored.  I couldn’t believe that something I wrote moved him so much that he wanted a permanent reminder of those words and the emotions behind them.  If you don’t believe me, here’s proof: 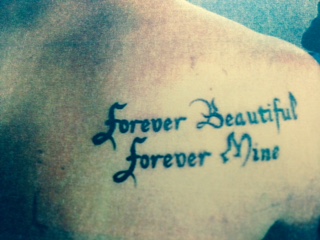 So I must be doing something right and whether or not I want to admit it, I’m successful.  Because you can’t only define success in terms of dollar signs.  And I’ve learned that if you do, then you’re completely missing the point.